Let’s all face the reality of it as it stands right now in 2014: As Enterprise Architects, and specifically those in the role of Business Architects, there is no real mature agreed set of Models and Operational Processes yet to follow to describe a fully mature Business Architecture in organisations. Sure there are bits and pieces all over the show that have evolved over time, but only now is it beginning to precipitate out into something more meaningful. Until then many of us are somewhat in the dark and all trying to pull together something meaningful which has some substance, works well and has some form of credibility with larger organisations.

We have input from the following sources (that I am aware of):

So in the mean time I have been trying to derive my own Meta-Model of Models for Business Architecture. This is what I have come up with so far. This will be a work in progress and I’d be keen to have others give me feedback, point me to good places to find more and better information about Business Architecture in general and more specifically in Models and techniques used in order to build up an Enterprise wide Business Architecture.

This is what I started with today. I have used the Archimate notation with three types of element: 1. Meaning (clouds) to describe each model type as I see it. 2. Business Objects (blocks) to describe the Model. 3. The Association (line) to give the type of relationship between the Meanings and the Business Object Models. 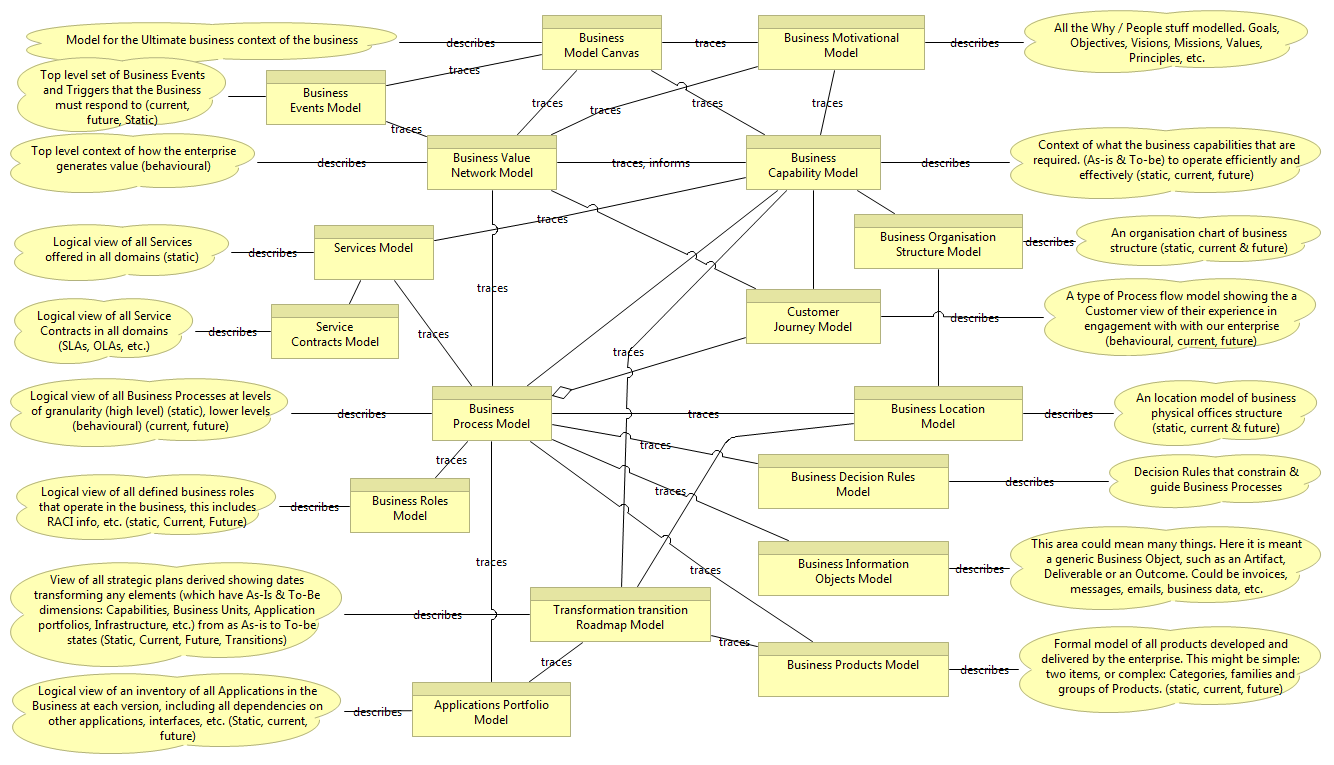 Here are some simple instance examples of each type of Model (as I get to each one) click on it to see it:

And of course for each of these one or many model types one needs some sort of Operational Process Describing how to approach it:

I’ll evolve this blog and thinking over time to include Governance, Risk, Measurements of things like Enterprise Debt, etc.

Please feel free to put forward comments on this to grow it on one of the linked in forums – either on Business Architecture Community Forum.

One view of the Enterprise Architecture is the Services View, where you can look at the whole enterprise from the Business capabilities, expressed as Services (or Capabilities – where conceptual and not yet implemented), through Logical Design Services, through Implemented Services, right down into the Physical implementation elements such as software infrastructure Services (like unix FTP components, Browsers, Middleware, etc.) and Hardware Services (Servers, Routers, Printers, etc.).

See example diagram below for a simple idea of these (using Archimate Notation):

I therefore believe that showing all the Services used in the Enterprise is possible at the right level of granularity. Services are more than just Web Services or the middle layer of this diagram “IS Application SOA implemented services”.

A chap from Troux technologies made some very interesting and enlightening points about Enterprise Architecture Modelling at a seminar in London recently. For me it was one of those Eureka moments, but also one of those things you’ve sort of known all the time but couldn’t put your finger on it and pin point exactly.

He was saying that historically software developers have seen the benefits in visually modelling the designs of software. We all know the old adage “A picture paints a 1000 words” that led to a proliferation in Modelling and Diagramming Applications (or are they called Tools? Why are we obsessed with calling Business software ‘Applications’ and IT software ‘Tools’? The subject of a separate blog no doubt.)

Visual modelling has grown organically from software development projects in IT outwards towards Enterprise Architecture in visually modelling and diagramming the various aspects of the organisation.Essentially a “model” captures entities and relationships and this information can be shown either visually in some notation or textually in lists of information based on some query. Intuitively though, the term “Model” implies “Visual Diagram” to most people; more than what it actually is “a well defined rigorous interconnected structure”. He also mentioned the other obvious meaning of Model such as those in London Fashion week, etc. Model can be a weather prediction system, Model can be a version of Car, or small plastic aeroplane stuck together using superglue.

The logic has been something along the lines of:

Then some time later (months or years if we have managed to survive the politics of non-delivery that long):

This is where Troux have made great strides technically I believe (and in some cases other vendors):

But even Troux have issues, because guess what? BI tools are weak in the Visual output of information.

So what is the upshot of all this? He was saying, if we think about what we mean by Model, then we will realise its more than just a set of Visual diagrams. It’s more about a well defined and interconnected System of Virtual Information about the Enterprise from which you can derive IT wide Decision Support. Actually I prefer to think of it as the missing piece in the overall Knowledge management of the whole Enterprise, IT just happens to be one of the users of this information, and it has stemmed out of IT by necessity.To me it’s about: